Receiving an award is always something special...but receiving three is, needless to say, exceptional. Steven A. Fangmann has received three awards recently as a result of a lifetime of service to his company and to the water industry that he has served for over 40 years.

Mr. Fangmann, who is President of D&B Engineers and Architects, (Woodbury NY), a leading Long Island-based engineering firm was recently honored by Long Island Business News (LIBN) as Top Engineer at the 2019 Real Estate, Architecture & Engineering Awards event. Mr. Fangmann was recognized as “an industry thought leader, speaker, author and field authority with over 40 years of extensive municipal experience in all aspects of environmental engineering in both private and public practice.”

His second honor, being named recipient of the NYWEA Nick Bartilucci Lifetime Achievement Award, might have been an act of fate. That’s because the award is named for Mr. Fangmann’s former boss, the late Nicholas J. Bartilucci, former President of D&B Engineers and Architects, who was a giant in the industry. The Nicholas J. Bartilucci Lifetime Achievement Award is presented to an active member of the Long Island Chapter of the New York Water Environment Association (NYWEA) who has demonstrated commitment to a career of improving the water quality environment and for providing long-term support of the chapter’s committees, board of directors, seminars or activities while encouraging new professionals to follow in their footsteps throughout the course of their career. The award specifically cites Mr. Fangmann’s “career fostering control of water pollution in Long Island, the state, the nation, and the world”. 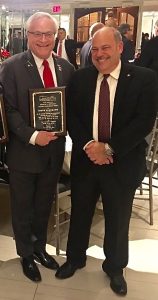 Mr. Fangmann said, “I have been privileged to know mentors like Nick Bartilucci, all in the D&B family and the many friends and acquaintances at the NYWEA and the NJWEA who together work day in and day out to protect our environment and infrastructure.”