When Old Was New at Citifield. 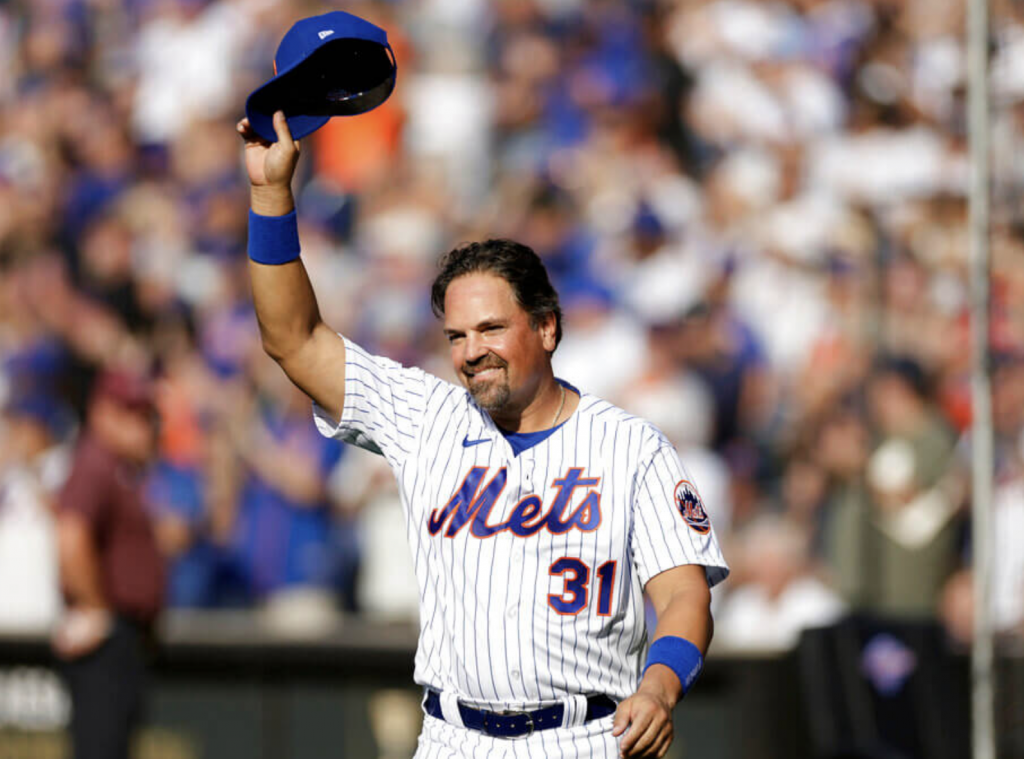 Bringing back Oldtimers Day was a welcomed event at Citi Field on Saturday, a thank-you gift from Mets CEO Steve Cohen, when literally every era in Mets history was represented by the over 60 participants donning the orange and blue once again.It was the first time the organization hosted an oldtimer’s event since 1994. But the most celebrated oldtimer was actually an absentee, and with good reason, as the Mets stunned everyone in the building with theannouncement that number 24, in honor of the great Willie Mays, will forever be retired, following up on a promise former Mets owner Mrs. Joan Payson made to the Hall of Famer after she traded for him in 1972. Mays’ son, Michael, was on the field with ex-mates to represent his father and help unveil the large circular plaque which will now occupy that “ring of honor” of retired numbers on the upper left field facade.

But more on that in a few moments.

Going back to the dawn of the organization in 1962, Ed Kranepool (who still holds the franchise mark of 18 seasons and many offensive records), Craig Anderson (who led the ’62 team in appearances and saves), Jay Hook (who earned the team’s first win), Ken McKenzie (the only ’62 hurler with a winning record, 8-5), Steve Dillon (who was claimed by the Mets off the Yankees in a Nov. 1962 draft), and the still feisty 93-year-old “original” Frank Thomas were on hand to recall the good, bad, and occasionally ugly of the team’s formative years. By the way – and this is a story for another day – Thomas likely earns serious consideration as a candidate for the Mets Hall of Fame. Leading that squad that lost a record 120 games that first year with 34 home runs and 94 RBIs and a .266 average in 156 games was no small feat when you consider most of the rest of the lineup were not big sluggers before opponents faced “The Big Donkey.” (Just don’t call him that nickname anymore unless you want to hear a verbal reprimand.) 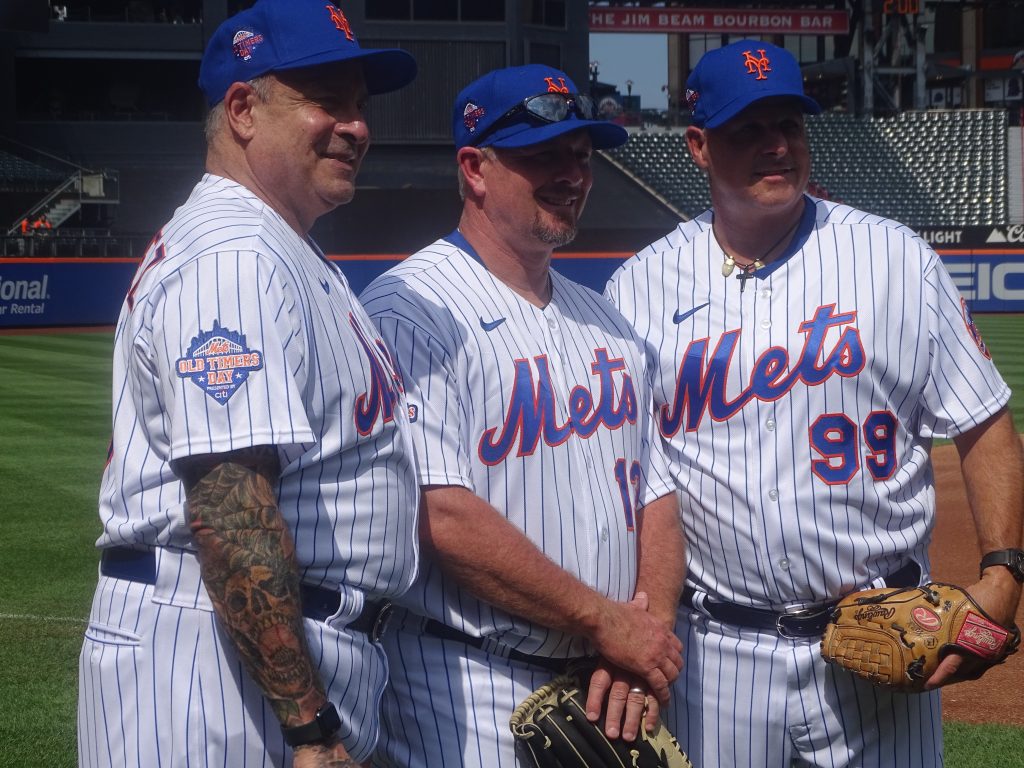 The Miracle of 1969, of course, was well-represented by the likes of Cleon Jones, Ron Swoboda, and Art Shamsky. Unfortunately, Bud Harrelson was unable to attend due to a medical condition. But Buddy’s wife and daughter represented him at the event. On the day before the event, Jones, Swoboda, and Shamsky were part of a Mets contingent who dedicated a new school in Queens in honor of their former teammate, Tommie Agee. On literally the exact site where Jones and Agee once owned and operated a bar/restaurant – walking distance from Citi Field – now sits the Tommie L. Agee Educational Center, PS 419, a middle school in East Elmhurst. 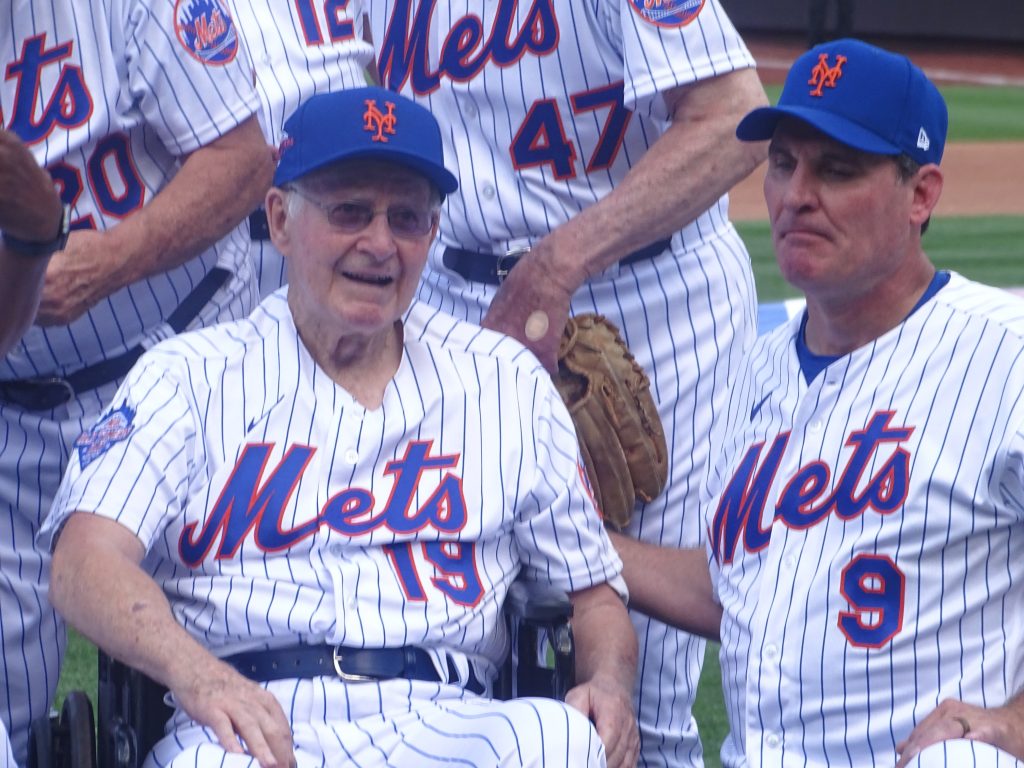 For the oldtimer’s game, although he didn’t actually get a chance to take the field or get an at-bat, Shamsky, 80, brought out his original glove from the ’69 World Series and proudly headed to his old outfield spot to shag during batting practice. That second trip to the World Series in 1973 was recalled with great vigor by Jon Matlack (three-time All-Star and Rookie of the Year in 1972) and Felix Millan (who batted .316 in the 1973 NLCS).Those nebulous ‘70s and disappointing early ‘80s between visits to the postseason still had their moments, and here was Skip Lockwood (2.80 ERA and 65 Saves during his five years as a Met), John “Bad Dude” Stearns, Ed Lynch (who still regrets being traded from the ’86 World Champs during that historic season, and well, who wouldn’t), and Steve “Hendu” Henderson reminiscing about those years.

The ’86 World Champs were well-received and well-attended, with Doc Gooden, Darryl Strawberry, Ron Darling, Keith Hernandez, Sid Fernandez, Terry Leach, Roger McDowell (the second spitter returns!), Bobby Ojeda, Jesse Orosco, Doug Sisk, Kevin Mitchell, Wally Backman, Kevin Elster, Ray Knight, Tim Teufel, Lee Mazzilli, and the inimitable Mookie Wilson. Unfortunately, Davey Johnson was unable to attend due to illness.Knight, 69, talked in a presser after the event with sincere gratitude about being welcomed “back into the Mets family.” He forever regrets being dissed by then-Met GM Frank Cashen after Knight earned MVP honors for his exploits in the 1986 World Series.On the morning of the day the team was to enjoy a parade down the Canyon of Heroes in Manhattan, Cashen made him an offer for 1987 with just a $5,000 raise, which amounted to not even a one, yes, one, percent increase from his ’86 salary.

“I couldn’t even enjoy the parade,” Knight said. Knight also admitted that to this day, he receives Christmas cards from four teams, the Reds, Orioles, Astros, and Tigers, four of the five teams he played for, but never received a Christmas card from the Mets during the Wilpon years. That might not seem like a big deal to some, but Knight appreciates the gesture, and was supremely grateful for the welcome by Mets CEO Steve Cohen. We’re guessing Knight will be placed on the Christmas card list this year by the Cohens. The hot and cold ‘90s, culminating with two very exciting years in ’99 and the new millennium World Series teams took the field, returning

Hall of Famer Mike Piazza, Al Leiter, Edgardo Alfonzo, David Cone, Dennis Cook, Todd Pratt, Todd Hundley, John Franco, Mike Hampton, Rico Brogna, Howard Johnson, Turk Wendell, Robin Ventura, Todd Zeile, Benny Agbayani, Jay Payton, Glendon Rusch, and Pat Mahomes (probably should include his “Sr.” designation, now that “Jr.” is one of the faces of the NFL in Kansas City). They were led by their ever-popular, fan-favorite skipper, Bobby Valentine. The post-Valentine era and the decade that found their way to another World Series in 2015 were back in Citi Field clocked in with Hall of Famer Pedro Martinez, Jose Reyes, (David Wright was an early bow-out due to an unnamed previous commitment), David Murphy, Steve Trachsel, Josh Thole, Cliff Floyd, and Endy Chavez, led by their managers Willie Randolph and Terry Collins.

“Big Sexy” was “in the house,” Bartolo Colon, no doubt still basking in the glow of his one and only major league home run some years backin San Diego. Mets broadcaster Gary Cohen still raves about that moment. Actually, Colon still showed he could rear back and delivered some potent strikes during his turn on the mound in the three-inning oldtimers game.

And Hall of Fame manager Joe Torre, who got his first taste of managing with the Mets back in 1977, and who is now a special assistant to Commissioner Rob Manfred overseeing many on-field operations was back in orange and blue for first time since 1981. Johann Santana, who was honored earlier this season near the ten-year anniversary of his no-hitter, the team’s first, was scheduled to appear, but sent his regrets and was unable to attend.

Howie Rose once again ably emceed the proceedings, and then the Mets vs. Mets, or rather, the Amazins vs. the Miracles, took the field. Torre and Randolph “managed” the Amazins. Their lineup: Alfonzo (3B), Teufel (2B), Floyd (RF), Piazza (C), Zeile (1B), Pratt (DH), Elster (SS), Agbayani (LF), Payton (CF).

Hmm, how did Bobby Valentine let his star legions get “traded?” Actually, the managers conducted a “draft” prior to the event. Valentine and Collins “managed” the Miracles. Their lineup: Reyes (SS), Wilson (CF), Murphy (2B), Johnson (1B), Mazzilli (DH), Ventura (3B), Henderson (RF), Chavez (LF), Thole (C). Valentine talked prior to the introductions about being involved, from a producer’s point of view, with a new movie about to be released starring Zac Efron, Bill Murray, and Russell Crowe, “Best Beer Run Ever.” As they say, soon at a theatre near you. Credit for bringing the whole event together and accomplishing the difficult job of coordinating all of the players coming in from all over the country goes to longtime PR VP Jay Horwitz, now the team’s VP of Alumni Relations and his staff. It’s not an easy job, and it’s something he’s been working on for over a year, making sure at least 60 former players in the team’s 60 season make their way back to “the family.” 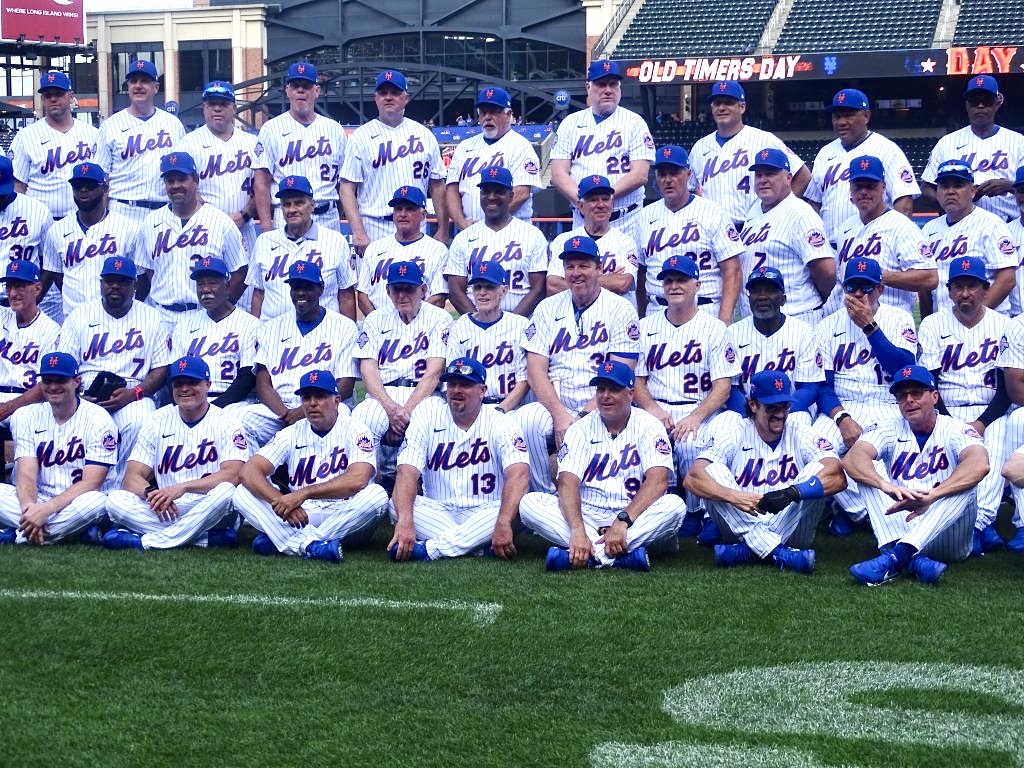 Horwitz definitely subscribes to the “once a Met, always a Met,” theory. Of course, the abbreviated oldtimers game was a fun and friendly exhibition, won by the “Miracles,” 8-1, on 14 hits, but “scoring” base hits was, shall we say, quite generous, and handing out errors to oldtimers was essentially “against the rules.” Highlights from the game included seeing John Franco as the “starting” pitcher. And then just as odd was having Dwight Gooden “relieve” Franco.

Baldwin resident Dillon, 79, didn’t let that many rings on his tree stop him from getting into the game. He pitched to both Wilson and Murphy. Gave up base hits to both. Leiter came in to face Piazza, his former battery mate, but had a hard time finding the plate. His first pitch to the Hall of Fame catcher sailed over his head to the backstop, prompting Mike to feign anger by waving his bat toward mound. Piazza would have walked after four pitches but since the big crowd came to see one of their beloved swing the bat, he stayed in the batter’s box. But after Balls 5 and 6, he was resigned to take his base and started a jog toward first, but quickly returned to the plate to get Leiter to throw a strike or two. After several foul balls, Piazza ended hitting a sac fly to center to score Teufel from third.

Piazza later singled with a hard grounder threw the 6 hole off Dennis Cook in his second at-bat. Next spring you’ll find Piazza, now pretty much a full-time resident of Italy, managing Italy in the World Baseball Classic, and he hopes to recruit Mets outfielder Brandon Nimmo for his squad. McDowell was the only pitcher to pick up a bat…twice, and got singles in both at-bats. Now back to the Say Hey Kid, who is far from still a “kid.” Mays, at 91, is now the oldest living Hall of Famer, and he was genuinely humbled by the Mets finally retiring his number.

In a brief speech read by Howie Rose at the end of the oldtimer introductions, Mays expressed sincere gratitude for the honor. “I want to thank Steve and Alex Cohen for making this day possible and embracing Mets history,” Mays said in a statement. “I can never forget how it felt to return to New York to play for all the loyal Mets fans. I’m tremendously proud I ended my career with the Mets in the ’73 World Series. It’s an honor to have my number retired in my two favorite cities, New York and San Francisco. New York was a magical place to play baseball.”

Mays now joins recent number retiree Keith Hernandez (#17), Jerry Koosman (#36), Mike Piazza (#31), and Tom Seaver (#41) as the only players to have their number retired by the team, with managers Gil Hodges (#14) and Casey Stengel (#37) also honored. And of course, number 42 is retired in honor of Jackie Robinson in all of baseball. Mets manager Buck Showalter, who made it a point to enjoy all of the pregame festivities from the field, re-making acquaintances from his storied career, put the icing on the cake for this bash.

“It was a great day for the Mets family, to get a chance to let (the oldtimers) know how much they mean to the Mets organization and the fans. It doesn’t come together easily, a special day all around, and I appreciate ownership that made it happen.”