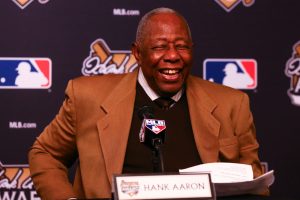 31 OCT 2015: Hank Aaron speaks during the awarding of the 2015 Hank Aaron Award prior to Game 4 of the 2015 World Series between the New York Mets and the Kansas City Royals played at Citi Field in Flushing,NY.(Photo by Rich Graessle/Icon Sportswire)

So that in part explains why Bad Henry Aaron was not THE most famous star in baseball during his playing days. It might explain why he was only MVP once, a very surprising fact considering he was the best pure hitter in both leagues for most of his career. This plethora of great baseball players, coupled with Hank’s own quiet demeanor and ambivalence for the spotlight, might explain it, but of course you have to factor in the restrictions, threats and prejudices of Jim Crow.

But make no mistake about it. Bad Henry Aaron was not merely a great home run hitter in the mold of the fearsome Harmon Killebrew, he was a five tool player who could hit, run, throw, field, steal bases and who happened to hit home runs. Lots of home runs. He was one of the best of all time at hitting to all fields (old timers compared him to Rogers Hornsby; go look up what that man did). Had he decided to change his beautiful, wrist hitting swing to pull more, he might have hit 900 baseballs out the park…or even more.

Bad Henry Aaron never did change his swing which is why he never reached 100 strikeouts in any season even though he (ironically) had 714 plate appearances one season, and played into his forties. 100 strikeouts is a half season for a great many current major leaguers, but of course, the game is different today.

Bad Henry Aaron won Golden Gloves, he won batting titles, he won a World Series against the mighty dynastic Yankees of the 1950s. He only played in two World Series and one 3-game playoff against the pitching-powered, upstart 1969 New York Mets. Combined, Bad Henry hit .362 with 6 homers and 16 rbis…in 17 post season games. Oh, and he homered in all three playoff games against those 1969 Mets, against guess who? Gary Gentry, Jerry Koosman and the man Henry called the toughest pitcher he ever faced, Tom Seaver. Not too shabby.

In fact, Bad Henry Aaron led the National League in major categories an unbelievable 39 times in his career. And he still is the all-time MLB leader in RBI (2,297) and Total Bases (6,856). Many feel he rightfully remains the lifetime leader in homeruns with his total of 755 legitimate homers to go with the thousands of racial taunts and real life death threats he endured while demonstrating his greatness in pursuit of Babe Ruth’s records. One can only imagine how Henry actually felt deep down inside when his lifetime home run record achievement was surpassed by a man playing under different rules. Records are made to be broken, right?

Bad Henry Aaron believed in himself and may have enjoyed the spotlight, but wasn’t driven by it. In 1963 he led the National League in runs, homers, RBI, slugging %, OPS, OPS+, Total Bases, was an all-star for the 12th consecutive time (he would be an all-star 24 times in all)…and he did NOT win the National League MVP. A man named Koufax did, but he  got his revenge against the righthanded half of the Dodgers Dynamic Duo, Don Drysdale…against whom Bad Henry Aaron slugged 17 homeruns lifetime.

Oh…they called him Bad Henry Aaron for a very good reason. And that was because when Hank Aaron was in the lineup and the Milwaukee or Atlanta Braves came to New York to play the Mets, everyone knew it was going to be a very bad day for Mets pitchers.

Bad Henry Aaron was my hero growing up. He still is.