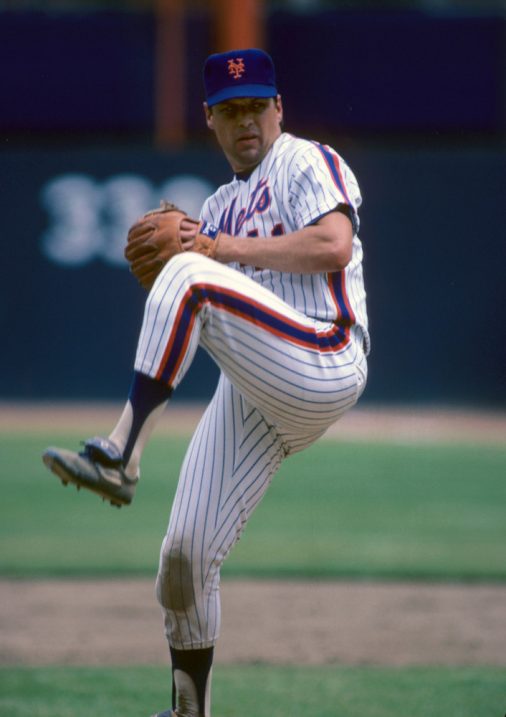 The Franchise is gone.

The baseball world was thoroughly shocked Wednesday evening with the news of the passing of Tom Seaver at the age of 75 from complications due to Lewy body dementia and Covid-19, all stemming from his years-long bout with Lyme Disease.

Seaver died peacefully in his sleep on Monday, Aug. 31, and the family, his wife, Nancy, daughters Sarah and Anne, and four grandsons, needed just an extra moment to collect their emotions as they braced for the world’s abundance of tributes and reflection.

“We are heartbroken to share that our beloved husband and father has passed away,” Nancy shared.  “We send our love out to his fans, as we mourn his loss with you.”

This one hurt.  It really hurt. George Thomas Seaver was the guy.  For every Mets fan, and virtually every baseball fan who admired and appreciated his craft of pitching at the highest level, he was generational.  He was the G.O.A.T.  And forever will be his legacy as such.

Jane Forbes Clark, Chairman of the National Baseball Hall of Fame and Museum in Cooperstown paid tribute in their press release:  “Tom Seaver’s life exemplified greatness in the game, as well as integrity, character, and sportsmanship – the ideals of a Hall of Fame career.”

Clark also re-confirmed that in 2014, Seaver pledged the donation of his personal collection to the Museum, so there it will remain in perpetuity for all to appreciate.

Have you noticed that all of the tributes and remembrances by every broadcaster, every reporter, every teammate, and virtually everyone in baseball – today and from the past – covering Seaver’s passing did so accompanied by personal reflection?

That’s how much this meant to one and all, an era-defining human who touched every life in a very personal positive way.

Of course Mets owners Fred and Jeff Wilpon honored their legendary performer in their release.

“We are devastated to learn of the passing of Mets legend and baseball Hall of Famer Tom Seaver.  Tom was nicknamed, “The Franchise, and “Tom Terrific,” because of how valuable he truly was to our organization and our loyal fans.  His #41 was the first player number retired by the organization in 1988. He was simply the greatest Mets player of all time and among the best to ever play the game.”

By the way, for those too young to recall, the nickname of Tom Terrific was actually lifted from a cartoon character which was popular in the early 1960s.  A Mets beat writer made the connection and the monicker stuck.

Were you there at Shea Stadium on June 24, 1988 when the Mets honored Tom Terrific, freshly retired from his third and last reunion as a Mets pitcher, as he was feted with Tom Seaver Day?  In a suit Seaver took to the mound for the ceremonial first pitch, and what do you think he did to signify this moment?  He grabbed the resin bag and dabbed his right knee to “dirty” and mimic his drop-and-drive delivery which always resulted in a stained uniform. It was this habit which the Mets of today honored their fallen comrade on Thursday.  Every player took some dirt to their right knee prior to the game and saluted Seaver in a pre-game ceremony moment of silence.

And it must have been a smiling Seaver looking down from baseball heaven as he watched his beloved Mets come from behind and defeat their crosstown rival Yankees in ten innings with a Pete Alonso walk-off home run, 9-7.  With Seaver’s #41 jersey hanging in the dugout.

Every time a Mets player gets a walk-off hit, an angel earns his orange and blue wings.  Didn’t you know that?

And to think this all came about by the good fortune of a draw from a hat!

By now, the story is legendary.  USC great Tom Seaver was signed by the Atlanta Braves in January of 1966.  But the Trojans still had two exhibition games to play, which meant that the Braves had circumvented an mlb amateur rule.  Commissioner William Eckert thereby voided Seaver’s deal with Atlanta.  And the kicker is that Seaver didn’t even participate in either of those fortuitous – for the Mets – exhibitions.

Eckert put Seaver’s deal up for grabs for any team in baseball and only three thought the Fresno, California native was worth a shot – the Phillies, Indians, and Mets (thank you, Yankees, for not participating).

Also of note was the Dodgers’ interest.  They were going to throw their hat, or chip, or whatever, into the figurative ring, and as it was, hat, but they were embroiled in a contract holdout with their ace starters Sandy Koufax and Don Drysdale, so the Dodgers missed the deadline to participate.

Then came 1968 and the man whom Seaver would forever hold in the highest regard – Gil Hodges.

The legendary Dodger and former Original Met was now their manager and taught his fledgling Mets how to be professional ballplayers and how to win.

That professionalsim rubbed off arguably most on Seaver, who wore it as a badge of honor the rest of his career, and in every subsequent interview – including his Hall of Fame induction, speech – he never failed to mention what Hodges meant to him and the team and they grew into champions.

And that they did.  They shocked not only the baseball world but literally every American by besting the Baltimore Orioles in the World Series that year, four games to one.  They went from annually losing 100 games a year, and from ninth place in 1968, to winning it all in ’69.  If they can put a man on the Moon, then a miracle can happen when a perpetual loser becomes the biggest winner.

And Seaver was the face of that victory, even if he did lose Game 1.

Perhaps the only benefit that arrives with the loss of a great individual are the stories that resurface.

All of Seaver’s surviving teammates and virtually anyone who had measurable contact with the man were recruited by every media outlet to recall their memorable moments.

Jerry Koosman recalled how the two Aces had little bets between them such as is who could “saw-off” the opposing team’s best hitters.  Sawing off means breaking bats, and the maddest Koos ever saw Seaver was when the lefty sawed-off Chicago’s Bill Madlock three times in a game, but Seaver could saw- off the Dodgers’ Ron Cey only twice in his subsequent start.  Seaver had to pay for dinner, fuming.

There was Seaver’s 300th win against the Yankees on Aug. 4, 1985, fittingly in New York, in Yankee Stadium.  As a member of the Chicago White Sox (another inglorious suffering by Mets fans when he was lost to the South Siders in an odd free agent compensation rule since abandoned after the 1983 season), Seaver prepared for the start knowing that “turning point of the game” would come in the later innings against another future Hall of Famer, Dave Winfield.

Seaver set him up by walking the batter before Winfield, Steve Balboni, then proceeded to treat the slower-than-slow Balboni by treating him like Rickey Henderson by throwing over to first several times, frustrating an anxious Winfield at the plate.  Seaver knew he could get Winny to swing at virtually anything after that, and sure enough, he got him out.

Johnny Bench, who was Seaver’s catcher when the Franchise was traded to Cincinnati – the darkest day in Mets history, June 15, 1977 – rejoiced in that every summer the Hall of Famers would gather in Cooperstown to welcome in the freshman class – Seaver would bring a case of his award-winning wine from his vineyard in Calistoga, CA, to share with fellow pitchers such as Steve Carlton, Jim Palmer, and his backstop.

Hank Aaron often admitted Seaver was the toughest pitcher he ever faced, and he faced a lot of great ones.  Meeting Seaver for the first time at the 1967 All-Star Game, Aaron remarked, “Kid, I know who you are, and before your career is over, I guarantee everyone in this stadium will, too.”

There was the “Imperfect Game” in July of 1969, when a little-known Cubbie named Jimmie Qualls broke up Seaver’s perfect game bid with a base hit to the outfield in the ninth inning.

But that game also served as prologue for things to come, especially to a young future broadcaster sitting in the Upper Deck at Shea, making a comingof-age correlation for a team that often couldn’t get out of its own way.

“I felt that was the night the Mets were bar-mitzvahed,” said Howie Rose. “They became men.”

There was the night he struck out 19 Padres in 1970, tieing a then-record with future HOF mate Carlton.  Number 41 put the icing on that cake by striking out the last 10 men he faced.

There was Seaver’s one and only no-hitter, alas as a member of the Reds, June 16, 1978, against the Cardinals.  He had thrown five one-hitters as a Met, but this time, the H column remained empty for the other side.

And then there was the first great reunion.

After the 1982 season, the Reds may have thought the ebullient righthander was “done,” going 5-13 (didn’t they notice the 2.78 ERA?), and traded him back to the Mets in a deal surely to inspire trivia questions.  Do you know who the Mets yielded to correct their mistake of trading him to Cincinnati in ’77?

The Mets sent infielder Lloyd McClendon, pitcher Charlie Puleo, and prospect Jason Felice to the Mets for Seaver.  Yay!  The hero was returning!

It was World Series-like anticipation for Opening Day in 1983.  As Seaver walked in from the bullpen for his start – practically sauntering by himself with little urgency – as the sell-out crowd rose to their feet and welcomed him with an absolute thunderous everlasting ovation.

Seaver thanked his fans with a six-inning, three-hit effort and the Mets won, 20.  It was Seaver’s 14th Opening Day assignment.

It’s still hard to revisit the disheartening moments.  There was that aforementioned trade to the Reds.  And then losing him again to Chicago after the ’83 season, or the fact that he was in the Red Sox dugout when the Mets won the big trophy again in 1986.

But all of that is now moot.  We’ve lost our Forever Ace, our countenance of winning, our rudder for victory.  He will remain in the hearts of Mets fans forever.

But fear not, the statue is still in the works.  It was announced last year when they re-christened the address of Citi-Field as 41 Seaver Way, that a statue featuring George Thomas Seaver was being commissioned, and all indications, despite Covid delays, it will be unveiled at the start of the 2021 season.

Only instead of being merely a testimony to the greatest Met, it will now also exist as a headstone in tribute.