Andy Esposito tells it like it is in New York Sports Day:

The Tom Seaver statue was dramatically unveiled prior to the Opening Day festivities at Citi Field on Friday, a stirring tribute to the greatest

player ever to don a Mets uniform, The Franchise.

Standing ten feet tall and weighing in at 3200 pounds of bronze and steel, Seaver is artfully captured in the crest of his famous drop-anddrive

delivery, his right knee just about to scrape the dirt in one of the most stunning larger-than-life statues you will ever confront.

The granite base pitcher’s mound alone is an additional 33,600 pounds as it now sits completing a “gateway” to the ballpark from the

subway station staircase opposite the original Home Run Apple in the plaza outside the stadium.

“There is a reason he was called, “The Franchise,’ said Mets Chairman and CEO Steve Cohen in a statement prior to the unveiling. “You

can’t measure what Tom Seaver meant to this organization. This magnificent statue will be wonderful daily reminder to Mets fans coming

to Citi Field that Tom Seaver is forever a Mets legend.”

Crafted by famed sculptor William Behrends, who was in attendance at the ceremony, this long-awaited unveiling was delayed for several

years due to Covid-related supply issues. The North Carolina-based artist likes to meet with the family of his intended portrayal and get

their suggestions. And he actually completes three versions of the statue – a small model to draw from, a half-sized entry, then the actual 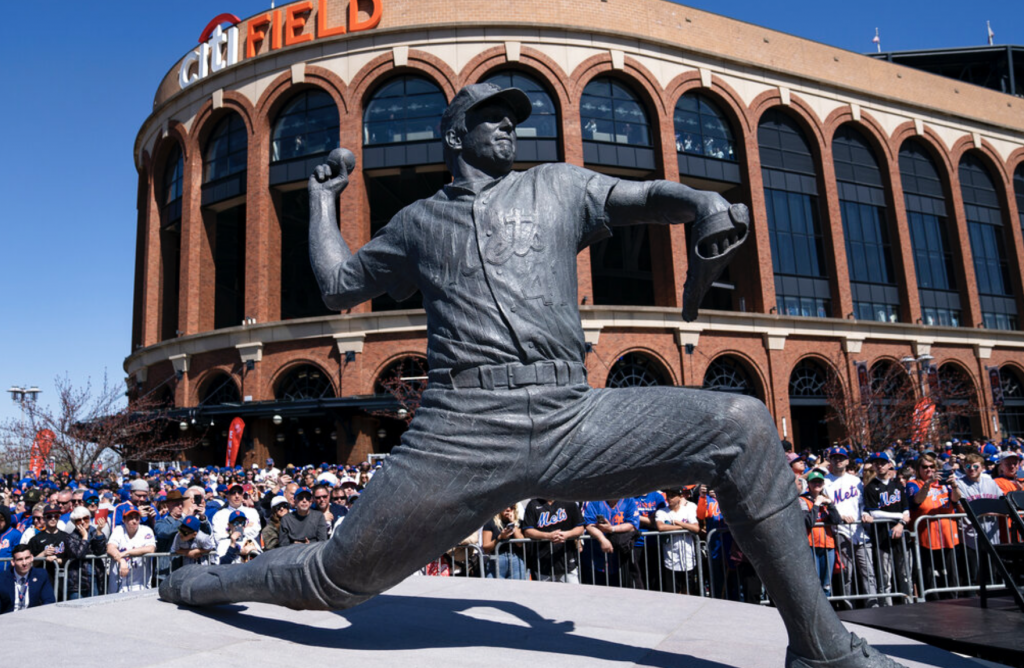 Hmm, since the finished piece at Citi Field is a twice-life-sized statue, does that mean there is a life-size version of the statue somewhere?

While all Mets fans would agree this tribute was long overdue, and arguably could have been installed when Citi Field was christened in

2009 – with the honoree on hand – a moment of gratitude to the Wilpon family must also be extended, as it was their commitment by the

former owners in 2019 that kickstarted the entire process by finally commissioning a statue for Tom Terrific.

Fred Wilpon attended the ceremony and was beaming with “grandfatherly” pride at the completion of the process.

The ceremony was well-attended outside the ballpark. Surrounded by thousands of fans and emceed by the “Voice of the Mets,” Howie

Rose (welcome back to the airwaves, by the way, Howie), several celebrants were called upon to extoll Seaver’s virtues.

Rose credited Seaver with the sunny weather. “Tom Seaver was our sunshine.”

The team’s No. 1 fan recalled a moment from his youth. “When I was a kid,” said Steve Cohen, “and thought of the Mets, I thought of Tom

Seaver. I can still see the windup, his knee dragging in the dirt, the ball exploding out of his hand. He transformed the Mets, transfixed

New York, and won the hearts of Mets fans.”

“It’s been said that humility is royalty without the crown. That’s why Tom Seaver is our royalty. The statue is a beautiful tribute, and a

memory that (we) will always hold special in our hearts.”

The former catcher, who likely deserves the ballpark’s next occasion a statue is commissioned – what do you think, Steve? – also recalled a

personal interaction with Seaver. After the pair were designated to throw out the first pitches on the last day of Shea Stadium, and again

the following year for the first game at Citi Field, Piazza told how Seaver made sure they “warmed up” and threw before they hit the field, a

moment he indicated he would cherish forever.

Queens Borough President Donovan Richards took to the podium, and perhaps ran a bit long as the crowd anxiously awaited the

“Tom showed us the true champion he was as a player and a person,” proclaimed Richards. “On the mound, he was untouchable. He

showed the world that great things can, and do happen, here in the best borough in New York City.”

The absolute pinnacle of joy at the event was the return of Seaver’s widow to the unveiling. Accompanied by her daughters, Sarah, and

Anne, Nancy Seaver, now 77, arrived to the podium and turned to the shrouded statue with an acknowledgement as if her beloved was still

“Hello, Tom, it’s so nice to have you where you belong.”

She expressed her gratitude to the Mets organization for the honor and thanked the fans for their support.

“Shortly after we arrived here, we felt embraced by the fans and by the public. That made us feel right at home very quickly.”

Then came the big moment, with Seaver’s daughters and Howie Rose calling for the tarp to be lifted, and it was truly a gasp-worthy

We’ve all seen statues of all kinds of historical figures, but this one felt like a one-person Mt. Rushmore up close and personal. There was

“motion” in its statuesque solidity.

Behrends now has quite a resume of legendary statues beautifying ballparks around the country. In San Francisco, there are Behrends

bronze figures of Tony Gwynn and Trevor Hoffman. And in the actual Hall of Fame in Cooperstown, there is a Behrends rendering of Buck

O’Neil, who will be formally inducted in a ceremony this July.

Seaver, who passed away at the age of 75 in August of 2020 due to complications from Lewy Body Dementia and Covid-19, remains the

Young Awards, 12 All-Star Games, and the Rookie of the Year Award in 1967 on his ledger.

And oh, by the way, it was also Jackie Robinson Day in a lockout-delayed Home Opener that saw the Mets beat the Arizona Diamondbacks,

It was a confluence of events that saw the Mets unveil the Seaver statue, host their first home game of the year, and celebrate the life and

influence of Jackie Robinson all on the same day.

opportunity to play the game of baseball. The first 25,000 fans were gifted with t-Shirts that replicated Robinson’s home jersey. The Mets

It was the 75 Anniversary of the day Robinson broke the color barrier, and the 25 Anniversary since major league baseball first

announced the annual tradition by having every player wear No. 42, first welcomed at Shea Stadium in 1997.