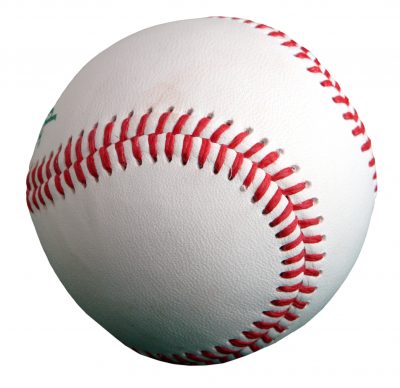 The beloved former Mets third baseman, who earned the colorful nickname, The Glider, for his smooth defensive acumen, lived his life with such ebullience, such a genuine zest for life, with his ever infectious smile, and childlike enthusiasm, that same enthusiasm that made him an invaluable ballplayer on a ballclub that defied the odds and won the most unlikeliest Championship in the history of the sport. So it is with great sadness we report the passing of Ed Charles at the age of 84, just a few weeks short of his 85th birthday, after a lengthy illness at his home in East Elmhurst, Queens. 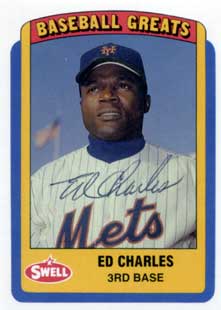 And think about that. Charles remained in Queens now some five decades since he retired following the victorious 1969 World Championship. While many former Mets chose to remain living in the New York area, how many replanted their roots practically within walking distance of Shea Stadium, and now its replacement, Citi Field.His passing was reported by his daughter-in-law, Tomika Charles.

Charles’ passion for baseball was equal to his passion for composing poetry, a hobby that helped him survive the segregated South growing up, and the racism he had to endure as a minor leaguer in the Braves’ farm system in the 1950s. His reputation for colorful rhymes earned him the title as Poet Laureate of the Mets.

A press release by the Mets again recognized his multiple skills. “Ed Charles, our beloved Glider and Poet Laureate of the 1969 Mets, was one of the kindest and warmest people ever to be a Met. His essays and poems inspired his teammates to the improbable World Series Championship. With Jackie Robinson as his role model, Ed perpetuated a legacy of making a positive impact on other people’s lives. Everyone at the Mets are sending condolences, thoughts and prayers to Ed’s longtime companion, Lavonnie Brinkley, his two sons, Edwin and Eric, sister Virginia Charles, and brother Elder.”

It was the legendary Jackie Robinson, who by example, set Charles on the path to becoming a major leaguer.  Charles always enjoyed telling the story that as a young teenager being raised in Daytona Beach, Florida, he was motivated when Jackie broke the color line, and he did what he could to go see him play at the Brooklyn Dodgers’ spring training camp in Vero Beach. It was a background that was fictionalized in the movie, “42.” That was supposed to be Ed as the young boy who puts his ear to the train tracks, knowing that the train carried Robinson “to the majors.”

It was teammate Jerry Koosman who bestowed Charles with his nickname. Soon after joining the Mets via trade with the Kansas City Athletics in 1967, Charles snagged a hot grounder with Koos on the mound. “He was sort of flabbergasted that I’d made the play,” Charles would recall later on. “He said, ‘You sort of glide to the ball. That’s it. You’re The Glider from now on.’ ”s 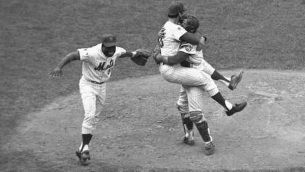 The Mets traded outfielder Larry Elliott and tossed in $50,000 to acquire Charles in May of ‘67. He had been with KC for just over five years after making his major league debut in 1962. For his first three years in the bigs, Charles averaged 16 homers and 72 RBIs, while batting .265.

Charles was signed by the Boston Braves in 1952 and spent the remainder of the ‘50s in their farm system, blocked by future Hall of Famer Eddie Mathews manning the hot corner for the parent club. In December of 1961, the Braves included Charles in a five-player deal with KC, sending Joe Azcue, Manny Jimenez and Charles to the Athletics for Lou Klimchock and Bob Shaw (ironically also future Mets).

With the Mets, Glider enjoyed a positive year in ‘68, batting .276 in 117 games, 15 homers and 76 RBIs. Under Gil Hodges’ leadership, Charles fell into a platoon with Wayne Garret in those years, and his 1969 production – at the age of 36 – may not seem impressive on paper (61 games, .207, 3 homers, 18 RBIs), and his World Series numbers also lackluster – just two hits in 15 at-bats – but he was there when you needed him most, and you can say he saved Game 2, the first World Series game ever won by the franchise.

With Game 1 already in the books for the big, bad, heavily favored Baltimore Orioles, the Mets were leading 2-1 in the ninth at Memorial Stadium in Baltimore. But with two outs, Frank Robinson walked. Earl Weaver sent Merv Rettenmund to pinch-run with the potential tying run. Boog Powell walked as the potential winning run. Hodges goes to the bullpen and brings in his closer, future Doctor Ron Taylor.

Up steps future Hall of Famer Brooks Robinson. Brooksie bangs a hard smash to his counterpart at third, The Glider, who comes up with it cleanly, and who fires to first for the game and the World Series win. The rest, as they say, is historic. The Mets took the next three games and made landing on the Moon just one of the many amazing headlines of 1969.

Ever meet someone who made you feel like a lifelong friend within moments of meeting them? That was Ed Charles. 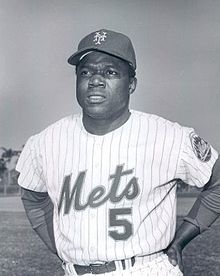 AN ATHLETE’S PRAYER by Ed Charles 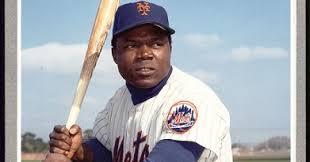 Author of my talents only you have I praised.

To thee only shall my hands be raised.

For when I was burdened with the weight of my team,

To my rescue you came it always did seem.

For outstanding was my play on any given day,

When you intervened to help lead the way.

Grateful to you I shall always be,

For exploiting my talents for the world to see.

In search of a place with other sports greats,

In the “Halls of Fame” where ability rates.

Where DiMaggio, Clemente, Robinson and the rest,

So guide me dear author for the competition is keen.

For many are the performers, yet few reach the top.

But with you leading the way, I cannot be stopped. 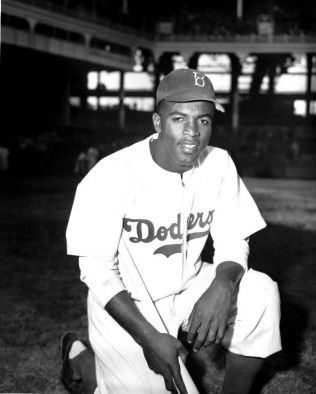 He accepted the challenge and played the game,

With a passion that few men possessed.

He stood tall in the face of society’s shame,

With a talent that God had blessed.

He opened up opportunities that never existed

For the likes of you and me.

This man from Georgia courageously assisted

In the dawning of a new era for thee.

Thanks, Jackie wherever you are.

You will always be our first “super star.”

For history shall record and eternally proclaim

Your great deeds in its Hall of Fame.