Next Met in the Hall?

An article by Andy Esposito for New York Sports Day:

To date, there is only one woman who has been officially inducted into the Baseball Hall of Fame in Cooperstown, Effa Manley, a pioneerexecutive in the Negro Leagues. It is time for another, Mrs. Joan W. Payson, the original owner of the New York Mets. Payson for Cooperstown might sound like a bumper sticker campaign slogan, but you won’t see it cropping up on billboards or lawn signs. Nonetheless, perhaps it is time for a grass roots campaign to encourage the Hall of Fame to add Mrs. Payson to the list of candidates for the next round of Veterans Committee considerations regarding what’s labeled as The Golden Days of Baseball – “those who made their indelible contributions to baseball from 1950 to 1969.”

Unfortunately, Payson missed out on the recent Veterans Committee vote this past December, when four quite deserving ballplayers received their ultimate tribute recognition and will be formally inducted this July – Gil Hodges, Jim Kaat, Minnie Minoso, and Tony Oliva. This quartet will be inducted, along with two electees from the “Early Baseball Era” Committee vote – which coincided with the Golden Days procedures – Buck O’Neil and Bud Fowler. And they will all be accompanied by the ever-ebullient David “Big Papi” Ortiz, who was voted in by the BBWAA in an election that was  announced in January. The ceremony will be held on Sunday, July 24, in the serenely pastoral field adjacent to the Clark Sports Complex on the outskirts of Cooperstown. Why Mrs. Payson? Well, for one, Payson was the first woman to own a professional sports franchise without inheriting it. She was just a fan, really, a well-bred sports enthusiast with ardent interests in thoroughbred racing as well. The New York City native became a fan of the then-New York Giants baseball club that occupied the Polo Grounds, and with the good fortune of being born into wealth, became a minority stockholder in the team. 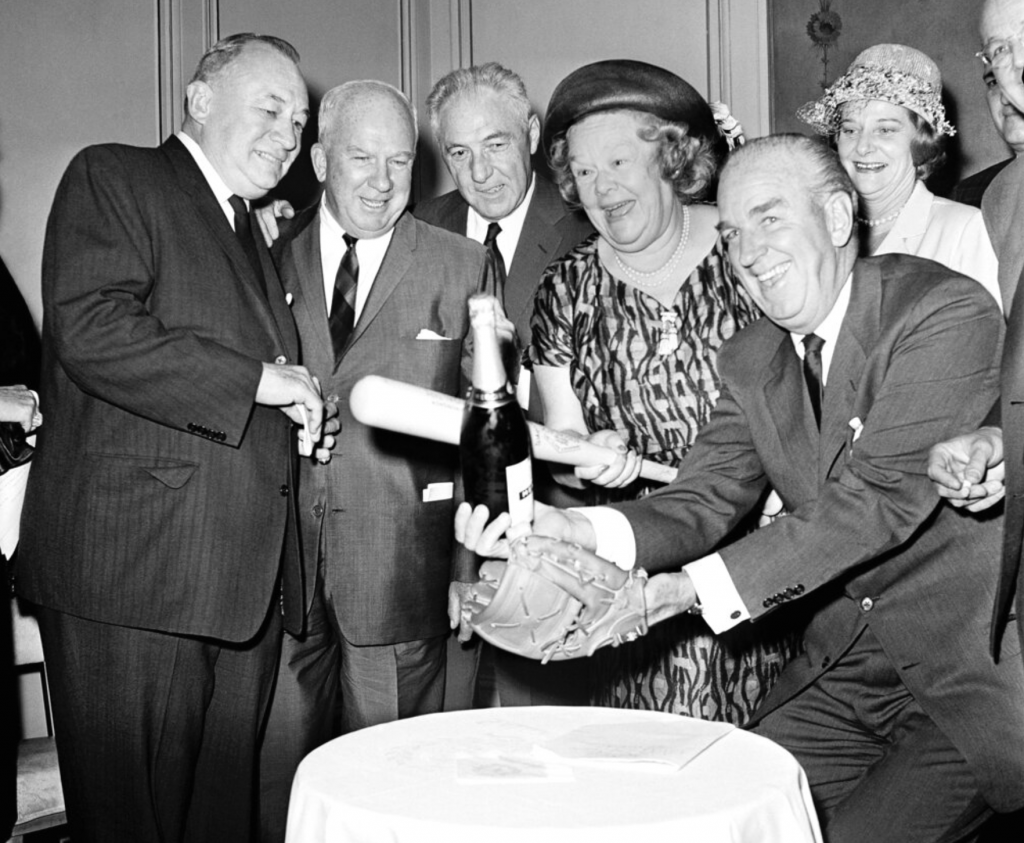 Payson and her husband, Charles Shipman Payson, vehemently opposed Giants principal owner Horace Stoneham’s decision to join the Dodgers in their Californian migration in 1957. Payson was the only stockholder to oppose the move. In fact, she even attempted to buy the club from Stoneham in an effort to keep them in New York.

Almost immediately upon the Giants’ exit, Mrs. Payson set about conspiring to return National League baseball to the Big Apple. Adopting the cross-river World Series rival New York Yankees just did not fuel her passion, although she did once admit she was a big fan of Joe

DiMaggio as a child. (And for those who might not be familiar with the city’s geography at that time, the Polo Grounds were directly across the Harlem River from Yankee Stadium, and indirectly the reason why the Yankees built their home a stone’s throw from their former residence in the Polo Grounds.)

Payson found compadres in New York City Mayor Robert Wagner, and attorney William Shea, who also were actively pursuing a replacement ballclub when the Dodgers and Giants ditched their roots. Shea was instrumental in bringing together investors to form a new major league, the Continental League, and in 1959 fronted the announcement the league would begin operations by 1961 with franchises in cities that did not already have a major league club – Denver, Houston, Toronto, Minneapolis-St. Paul, and the now NL-less New York, with applications shortly approved for teams also in Atlanta, Dallas- Ft. Worth, and Buffalo. Funny how all but one of these then baseball-starved communities now all boast of big league clubs, with Buffalo still eagerly awaiting.

Former legendary Dodgers President Branch Rickey was named the league’s first President. Payson committed $50,000 for the New York franchise. The Continental League really wanted to be adopted by MLB as a third branch, perhaps with some sort of round-robin tournament at the end of each season leading to a World Series, or just absorbed into the league. But the staunch old-school barons of baseball would have none of it. Instead, fearing their league would be raided by the upstart Continentals and raising their costs, they agreed to expansion and allow a handful of these newcomers into their fraternity. And that’s how the Mets came to exist – with Mrs. Payson as its owner, along with franchises headed to Minneapolis-St. Paul (uprooting theWashington Senators in a weird trade, replacing the Senators with a new Senators), in Southern California – with singing cowboy legend Gene Autry as its owner, and Houston – born as the Colt 45s.

Payson’s Mets – she first wanted to dub them the Meadowlarks – began play in 1962 with a gang of aging National Leaguers but with familiar names and some notoriety, including Richie Ashburn, Gus Bell, Frank Thomas, Roger Craig, Don Zimmer, and Gil Hodges. They set a record for futility, losing 120 games their first season, but that didn’t keep Mrs. Payson from her role as their No. 1 fan, a familiar face often seated in a box right next to the Mets dugout. She kept a scorecard, was a vocal rooter, and when she traveled, those around her were asked to keep tabs on the team. Those early years were not fruitful on the field, but then came the miracle of 1969, and her dedication and investment paid off in the most glorious way, a World Championship for the first female owner of a major league franchise. And in 1972, her early allegiances came full circle when she practically ordered her Mets to trade for Willie Mays from the San Francisco Giants at the end of his illustrious career. Effa Manley also was a big baseball fan. The Philadelphia native met her husband, Abe Manley at a New York Yankees game. Together, they owned the Newark Eagles from 1935-48. During her time as co-owner, Manley was the team’s business manager, was skilled at marketing and promotions, advocated for better pay and conditions for her players – the Eagles traveled in the only air-conditioned bus owned by a Negro Leagues team – and also served as the treasurer of the Negro Leagues. Larry Doby, Monte Irvin, and Don Newcombe were among the many notable Eagles during her era, and Manley also enjoyed a Championship. The Eagles won the Negro League World Series in 1946. A vocal crusader of civil rights, Manley also engineered a 1934 boycott of a Manhattan department store, Blumstein’s, that refused to hire black salesclerks. Within a year, Blumstein’s and hundreds of other retailers employed black salesclerks. Years later, Manley and her Eagles helped raise funds for the Booker T. Washington Community Hospital in New Jersey, a facility which allowed black doctors and nurses, previously and predominantly barred from white hospitals and facilities.

Manley was elected to the Baseball Hall of Fame in 2006 from a special Veteran’s Committee that did a deep dive into the Negro Leagues and selected 17 members from their ranks. Mrs. Payson also served her community with humanitarian efforts. A portion of her massive estate in Manhasset on Long Island – dubbed Greentree as were her racing stables in Saratoga Springs, NY, and her breeding farm in Lexington, Kentucky – became the grounds of the North Shore Hospital on Community Drive. An avid art collector with numerous pieces by the masters of their genres, Payson donated significant works to the Metropolitan Museum of Art in New York City, and the rest of her collection is on permanent loan to the Portland Museum of Art in Maine. Today her 50-room mansion in Manhasset is part of a religion-based complex run by the Unitarian Universalist Congregation at Shelter Rock. When life begins to get back to normal, special events are held on their grounds for members and invited guests, and services are held every Sunday in their chapel, so if you’d ever like to see where the benevolent Mrs. Payson entertained and celebrated the Mets’ Championship, take a note of their schedules. So you can see that it is not an outrageous claim that Mrs. Payson deserves a plaque in the Baseball Hall of Fame. She became the first inductee into the Mets Hall of Fame in 1981, and her plaque now presides over the 24 other members of the team’s Hall of Fame. Mrs. Payson’s plaque and the others are on permanent display in the Mets Museum, situated just inside the main entrance of Citi Field in the Jackie Robinson Rotunda. Mrs. Payson’s next chance to be considered for induction into baseball’s heaven on Earth does not come until 2027. That’s when the various permutations of Veterans Committees again evaluates the Golden Days. At the end of this year, and once more two years hence, they will again re-analyze “Today’s Game,” those who “made their most indelible contribution to baseball from 1988 to the present.” “Modern Baseball” (1970-87) gets their look in 2024 and 2026. “Early Baseball” (prior to 1950) doesn’t present their cases for another decade, batter up in 2032. There are 16 members of the Hall of Fame Board-appointed Veterans Committee and that group, which includes Hall of Famers, executives, and writers, can change as time passes. Votes from at least 12 members results in election. The Committee that voted this past December included: Joe Torre, Bud Selig, Ozzie Smith, Fergie Jenkins, Bert Blyleven, Mike Schmidt, John Shuerholz, Al Avila, Bill DeWitt,Ken Kendrick, Kim Ng, Tony Reagins, Steve Hirdt, Jamie Jarrin, Jack O’Connell, and Adrian Burgos, Jr. So for now, if you agree that Mrs. Payson deserves at least the chance to be considered, you could start a letter or email campaign directed to the these committee members at the Hall with a nudge to say, “What about Mrs. Payson?”

Payson for Cooperstown. Kinda has a nice ring to it.