The epic fantasy adventure, Morningstar Dawn: The Third Cataclysm  has been published in a print version by Amazon (https://www.amazon.com/Morningstar-Dawn-Cataclysm-JP-Stanco/dp/1733177744).

Written by JP Stanco, the 428 page novel includes a prologue and an epilogue as well as Velaharian Glossary for those intimidated by the breadth of entering a new world (one reviewer terms it “Lord Of The Rings on steroids!).

Morningstar Dawn: The Third Cataclysm is a fast-paced story which creates a complete realm that will absorb aficionados of the genre that pits swords and crossbows against sorcery and spellbinding, as well as all fans of suspenseful and dramatic tales. 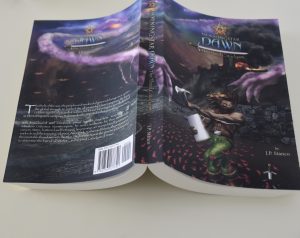 An epic swords and sorcery fantasy, Morningstar Dawn: The Third Cataclysm revolves around the ignition of a diabolical curse and the most heinous of crimes, the theft of Sulitar, the sun. Long prophesied in ancient chronicles, the misdeed plays off ignorance, greed, manifest destiny and racial hatred to achieve an aeons old goal of genocidal revenge.

The despicable act  has been planned to coincide with the return of the all-powerful Elios Eserpious life force. The hero/anti-hero, Nathanatoll of Sabua, the nothing man, is a  golden-eyed former Morningstar guerrilla who escapes a Bakirian death camp when Sulitar vanishes. The unwitting possessor of Elios Eserpious, he is a pawn in the vicious struggle for supremacy. Sorcerers, white faced conquistadors, morphlings and great monsters alike vie to seize control of the life force at the predetermined yoctosecond which will unleash their power and make them unrivaled masters of planet Velahar and beyond.

From its prologue onward, Morningstar Dawn: The Third Cataclysm creates an absorbing world in chaos. The hulking, bronze-skinned Nathanatoll appears ignoble as he wallows in self-righteousness and pity, justifying his rejection of a world which has abused and mistreated him. He seeks the missing sunbeams not to save all life, but to collect the tremendous rewards. However, as he applies his wits, courage and broadsword in thrilling encounters and battles, his inherent nobility transforms him into a sympathetic character.

Abetted by the handsome, acid-tongued Treyblade, a Manofaere with changeling eyes and olfactory powers, he is relentlessly pursued by whitefaced Oskenwar stormtroopers, refuses to join the Sabuan revolutionary movement led by Chipla the teenage spy and prophet and survives encounters with the mercurial, crazed spellbinder Erichane Algressaro who craves Elios Eserpious in order to return to his time, the future. Nathanatoll battles the colossus Ancraturk, Velahar’s most powerful mortal, escapes giant vampire bats and Kintupu the Moving Mountain and escapes from a misandristic emasculation ceremony with the help of a princess he will accidentally slay.

Suspense heightens when the  traitorous half reptile, half insect (reptisectoid) Taml Twelve Eyes Alman Recourta, who is spellbound inside a man’s physical being, murders Treyblade on orders of his master, Algressaro. A vengeful Nathanatoll descends on a perilous journey to the Deadlands in an effort to bring his boon companion back to life.

With the reemergence of Elios Eserpious at hand, the action becomes furious and fatal. The reborn Treyblade’s pleas to save Nathantoll’s life fall on deaf ears, and the Morningstar embraces his destiny to battle the true Thief of the Sun, a sorcerer long ago branded GrannBuffoon for his traitorous actions. The Thief is a maelstrom of blinding, radioactive, silver energy, and his vengeance is the atomic propellant for all action. Nathanatoll battles the monster in an agonizing, tempestuous, emotional final scene, in the very spot where he was born and where it is prophesied in Chronosartovan that he will return.

With its storyline, parallel plot, interludes of levity and memorable characters, the tale is set against an everchanging hallucinogenic panorama. Morningstar Dawn: The Third Cataclysm is a fast-paced story which creates a complete realm that will absorb aficionados of the genre that pits swords and crossbows against sorcery and spellbinding, as well as all fans of suspenseful and dramatic tales.

More: Morningstar Dawn: The Third Cataclysm weaves together several concurrent themes into one cohesive tapestry: the close-knit friendship of Nathanatoll and Treyblade; the steadfast loyalty of the teenaged Chipla, the boy-who-speaks-as-an-old-man; the struggles of Alman Recourta, whose reptisectoid essence struggles mightily for dominance against the pervasive human soul.

Serious issues resonate throughout the tale, including injustices of race discrimination; the imperialistic manifest destiny of nations; evils of the slave trade; bogus trials; misanthropic, anti-male tribalism; and the love sacrifice a princess makes for her emasculated paramour.