Esposito: Mets As Old As Yanks in ’62

An interesting anniversary of sorts occurred on Opening Day this year that no one noticed.  Make that a milestone that means little, yet says a lot.

The Mets franchise is now as old as the Yankees franchise was in 1962.  The Mets are now 59 years old, in this, their 60thseason as a major league franchise.

In 1962, as the Mets were just spreading their fledgling wings, the Yankees were then 59 years old, in what became their 60th season as a franchise, and which resulted in their 20th World Championship, and the 27th time they had appeared in the World Series.

And not even the Yankees have come close to matching such levels of success in the 59 years since the Mets came into existence.  Of course, the Yanks have done very, very well, and certainly far better than any other club, having won another seven crowns while reaching the Fall Classic another 13 times in the past five decades.

The Mets are a modest two out of five from their World Series appearances since being hatched in ’62, raising at least NL flags in 1969, 1973, 1986, 2000, and 2015, with ’69 and ’86 celebrated as the Glory Years.  New Mets owner Steve Cohen hopes to add to that history and perhaps this year’s squad will create its own legacies, but that remains to be seen.

Interestingly, the early days of the Yankees were nearly as frustratingly filled with failure as the first years of the Mets.

Most long-time Mets fans, and any baseball fan of a certain age knows the first seven years of the franchise were historically bad, losing a record 120 games in 1962, frequently dropping over 100 games per season and perpetually languishing mostly in last place until essentially going from worst to first in 1969.

The Yankees were perennial also-rans for the first 18 years of their existence, rising only as high as second place just three times in that era.  But after the 1919 season, team owner Jacob Ruppert made a financial deal for a guy named George Herman Ruth and the world has never been the same since.

Unless you have followed the history, you might not also know that the Yankees are a relocated franchise.  They really began as the Baltimore Orioles in 1901, with legendary future Hall of Famer John McGraw as their manager.

A brief window into their history reveals that McGraw bolted for the New York Giants after the 1902 season, and since the skipper owned a majority piece of the Orioles, that controlling interest now briefly belonged to the Giants.  How’s that little tidbit?

The American League, run by its President, Ban Johnson, wrangled control of the franchise back from the Giants on a technicality, when the Orioles literally ran out of players and had to forfeit a game.

Johnson wanted a league entity in New York and sold the franchise to a pair of Tammany Hall politicians, Frank J. Farrell and William Stephen Devery, for just $18,000.

They joined the AL, but they weren’t the Yankees then.  In fact, officially, they didn’t have a team name.  They were first unofficially nicknamed the New York Americans, and that evolved into the Highlanders, which had a double meaning.  They played their home games on high ground on the Upper West side of Manhattan.  The ballpark was on Broadway between 165 and 168th street and known as Hilltop Park.

The other half of the meaning was tied into its team President, Joe Gordon – not the Hall of Fame second baseman – and a military unit known as Gordon’s Highlanders.

Newspapers of the day as early as 1904 also utilized an unofficial nickname of “Yankees,” and in headlines as “Yanks” – since “Highlanders” was harder to fit in most headlines.

In 1913 they officially adopted the Yankees moniker.

A deeper dive into the history of the word, Yankees, finds fascinating roots nearly as old as the city they call home.  There are various origin stories and no definitive answer, but most trace its ancestry to New Amsterdam.

Most know the Dutch first settled New York in 1624 and dubbed it New Amsterdam.  English settlers focused on what became Connecticut and thus began the first “rivalry” between what became “New York Metro” and “New England.”

The Dutch pronounce the letter J as Y, so the names Jan, and Kees, which often were linked as Jan Kees, or even Janneke, came out as “Yon Kees.” The British anglicized this and their perception was that it sounded like “John Cheese.”

As long ago as 1683, British settlers “slurred” their Dutch-American neighbors as “Yankees” or “John Cheese.”

The Dutch threw that insult back at the Brits and the “Yankees” affectation eventually described settlers in all of New England.  There was even a pirate in the 17th Century known as the “Dutch Yanky.”

There were dozens of other references as the nickname traversed the centuries and by the time legendary author Mark Twain scribed, “A Connecticut Yankee in King Arthur’s Court” in 1889, the appellation was firmly locked in.

Makes you wonder why one of the Boston baseball clubs didn’t adopt the designation – either the Braves or the Red Sox, but Boston “Yankees” just doesn’t sound right, does it.

The Mets have a much simpler naming history.  When it was determined there would again be a National Club back in New York City in 1961 – after the Dodgers and Giants had abandoned their homesteads in 1957 – there were over a dozen other nicknames seriously considered, including the Jets, Skyliners, and Burros.

The New York “John Cheesers” was, thankfully, not considered. 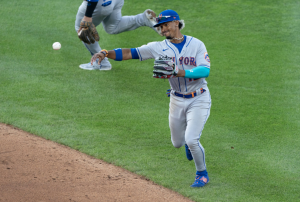