Ensuring the future is an essential part of what a testing laboratory is all about. In fact, that concept underlies every EMC test and all the torturous Environmental Simulation testing that products undergo en route to compliance. Retlif Testing Laboratories (HQ Ronkonkoma, NY), a leading independent EMC and Environmental Simulation compliance organization founded in 1978, ensures the future beyond products…with people…from the ground up…with their firm commitment to sponsorship of the U.S. Naval Sea Cadets.

Getting Behind A Most Worthy Cause 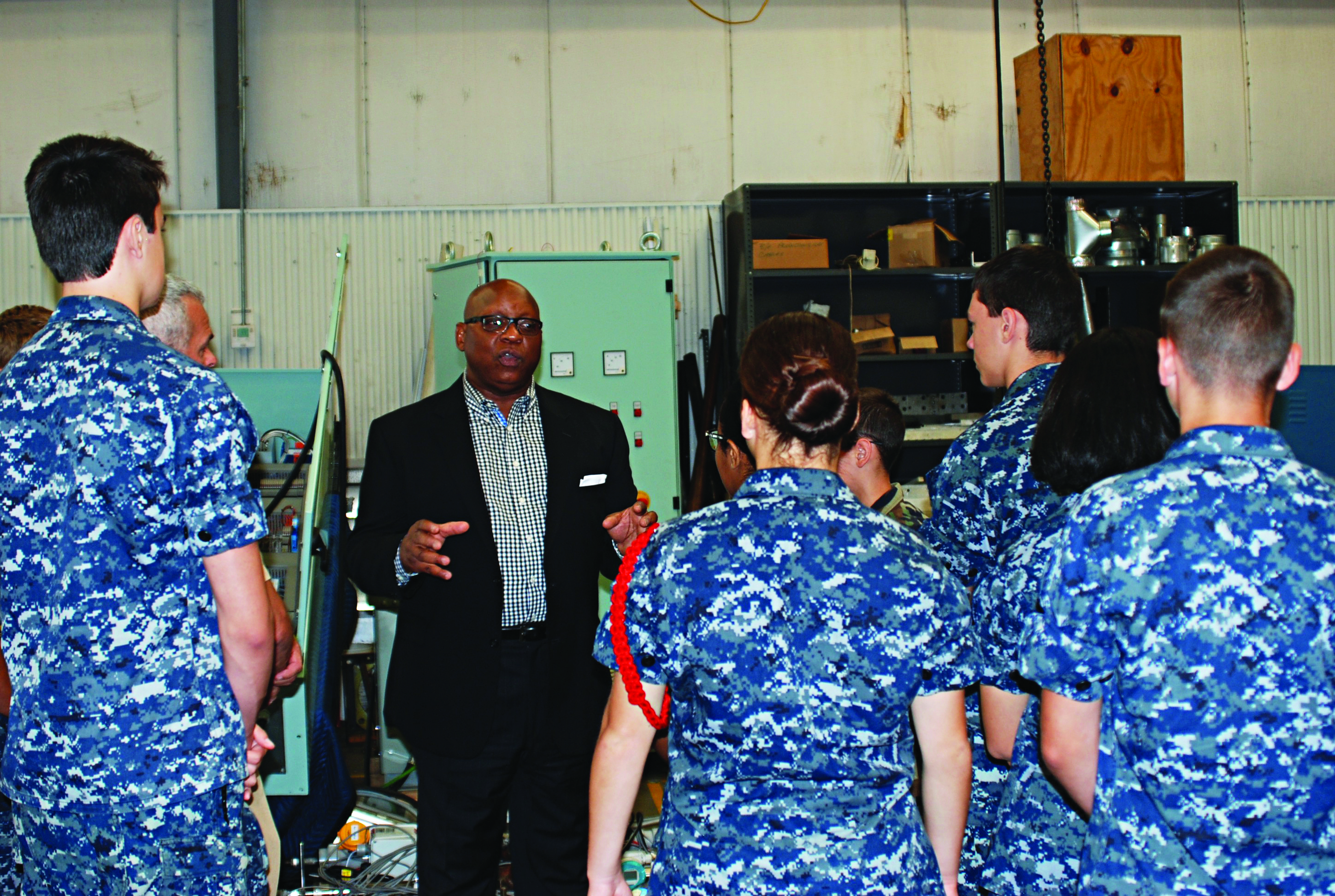 The U.S. Naval Sea Cadets program is a vital one. It is designed to build leadership in young men and women with a specific mission to expose cadets to the full rigors of a military training program for the paths they make take after high school graduation.

Retlif’s sponsorship of the U.S. Naval Sea Cadets began in 2010 and it is neither that of a ‘Sunday patriot or a fair weather sailor‘. Instead it is a real time belief in the success of the Sea Cadets, and it has grown markedly through the years. For example, in 2017 the Retlif commitment took shape in several tangible ways. It all started with the Sea Cadets visiting Retlif headquarters in Ronkonkoma, New York. Some twenty-five cadets along with advisors received a close up look at areas of the 19,000 square foot facility that began with an industry overview from Retlif Executive Vice President Bill Hayes. 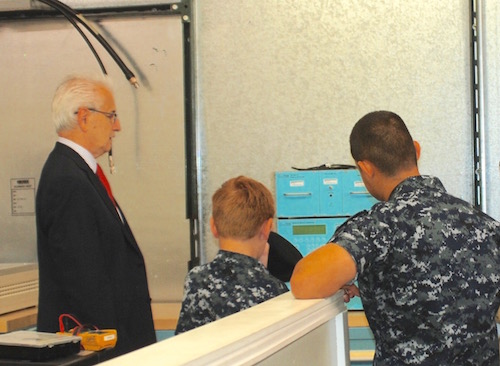 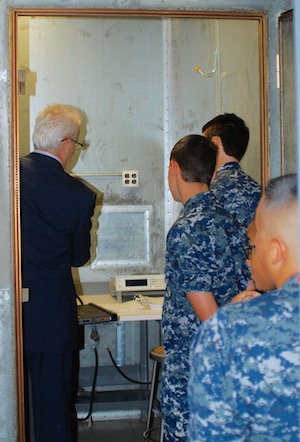 Mr. Hayes explained to the Sea Cadets how the essential value of product compliance testing enabled Retlif customers, typically product manufacturers, to meet the needs of their audiences. He detailed how Retlif’s EMC (Electromagnetic Compatibility) and ESS (Environmental Simulation) testing benefitted Retlif’s maritime customers and ultimately all branches of the U.S. military, and also Retlif customers in diverse areas such as rail, aerospace, and composites.
The climax of the visit occurred when Mr. Hayes and Owen Watford, Retlif’s Business Development Manager, split the cadets into two groups for walkthroughs of both the EMC laboratory and the Environmental Simulation laboratory. The tours opened their young eyes to a world replete with state-of-the-art anechoic rooms, a 1,000-square foot walk in test chamber, and even a 77-cubic foot explosive atmosphere chamber. In other words, the cadets were exposed to an entire world that few ever get to experience due to security issues and strict internal controls. 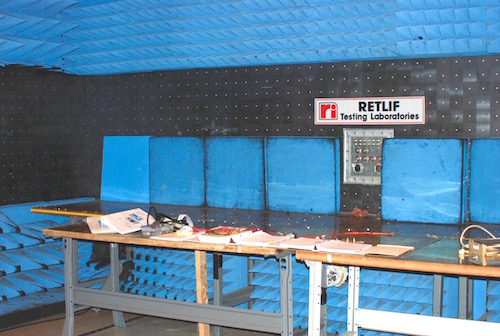 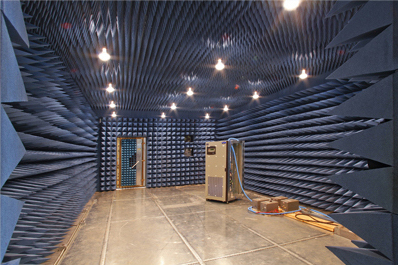 Perhaps it will not rank with Columbus’ crossing of the Atlantic in 1492, but the Sea Cadets were involved an exciting voyage that no one will soon forget. As a further example of commitment, Retlif sponsored a “Voyage of Discovery”, a life-changing experience aboard the Nada, a 47-foot sailing vessel. Six teenage U.S. Naval Sea Cadets from Long Island set sail from Mt. Sinai Harbor on Long Island Sound bringing back invaluable practical experience on the high seas and a wealth of tactical training. Captain Roger Noakes and three experienced crewmen sailed with the aspiring U.S. Navy Midshipmen aboard the Nada. 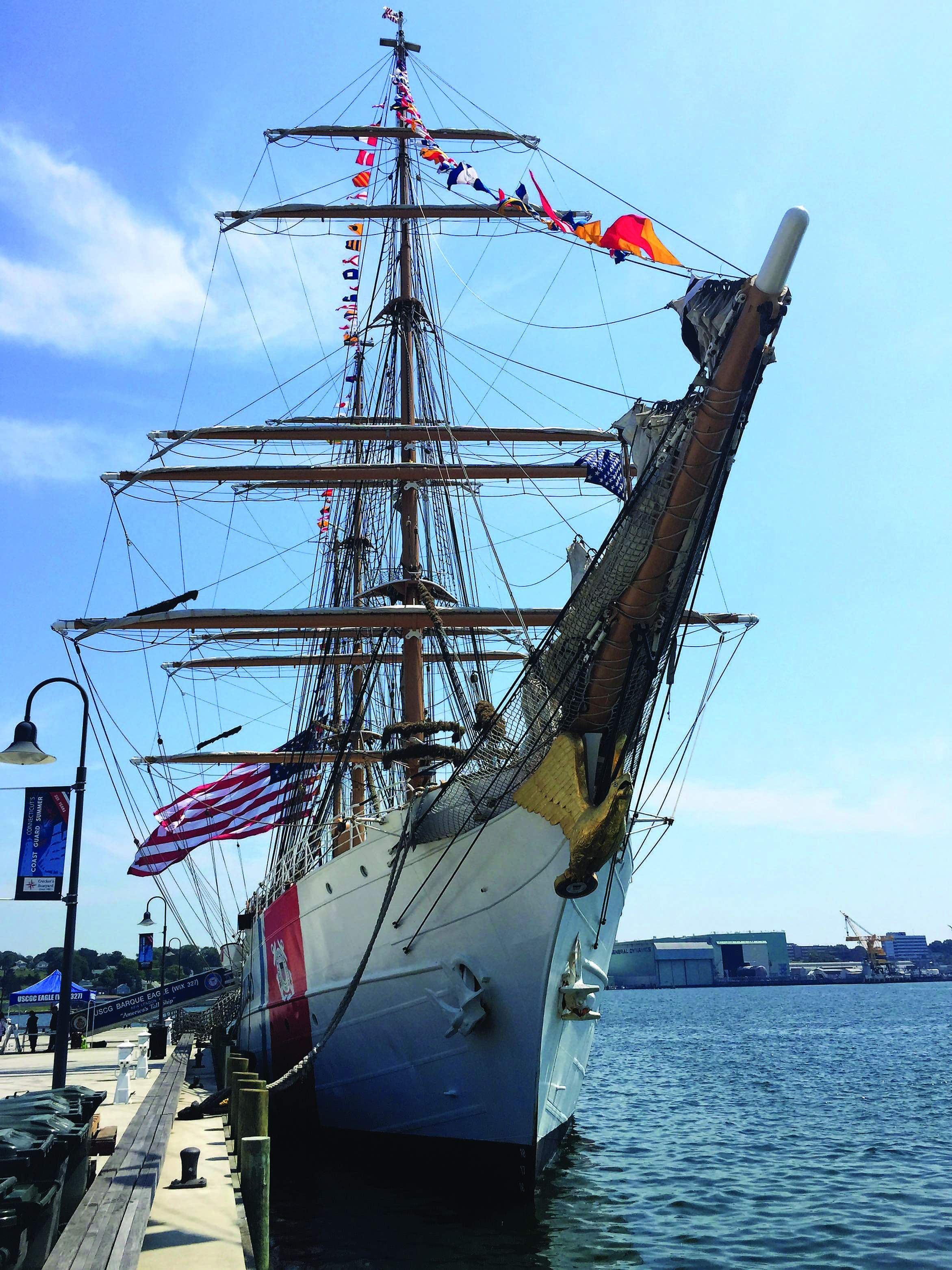 The crew sailed the Nada north of Boston to Cape Cod with a stop at the historic port of Gloucester, Massachusetts where they docked at the US Coast Guard station and conducted repairs to navigation lights. The Voyage Of Discovery continued further north to Portland, Maine for a final check of the crew’s confidence and willingness to head “offshore”. 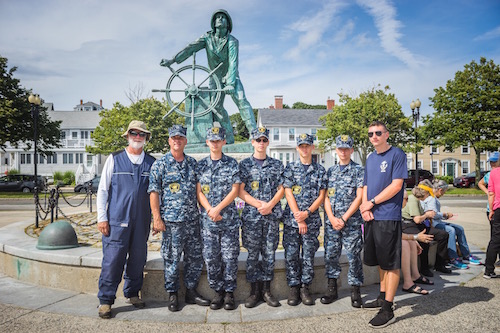 After a day of sailing in the Gulf of Maine, the Nada was beyond all shore-based communications. Captain Noakes and the Sea Cadets relied on daily satellite phone calls with a shore-based contact who relayed weather forecasts and important information while confirming that all crew and family members aboard were safe.

The voyage took the Nada to the storied and infamous St. Georges Bank, the largest and most important fishing grounds near the U.S. Atlantic coast. With its fog, stormy weather and cold ocean currents as well as 15-foot ocean waves and winds approaching 40 knots, the Sea Cadets received a first hand appreciation of the rigors of a military training program. The fog limited visibility to a few feet, and as Captain Noakes remarked, “in these conditions, we relied on the radar made possible by a generous donation from Retlif Testing Laboratories. The radar helped the 40’ Nada avoid run-ins with 100-foot ocean fishing vessels which could have spelled disaster if one had surprised us emerging out of the mist”.

One night the Nada’s crew “hove-to” to ride out a storm. In layman’s terms this means stopping the boat and using the sails to steady the motion as the Nada drifted sideways in a controlled, seakeeping manner. “Seakeeping is a measure of how well-suited a watercraft is to conditions while underway, a time-tested means of dealing with very bad weather,” Captain Noakes explained. “I’m pleased to say that the Sea Cadets demonstrated their resolve and rested in relative comfort, happy to have experienced this rare seakeeping tactic.” 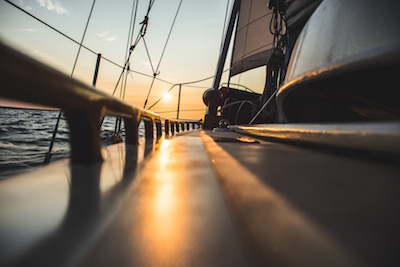 The sea is a fickle mistress and eventually when a satellite call informed the voyagers that a tropical disturbance forming in the Caribbean might develop into a hurricane with storm force winds 150 miles south of Cape Cod, it was decided to head back home. The Sea Cadets returned via Cape Cod. That tropical disturbance developed into Hurricane Gert, which produced huge waves, and so the Sea Cadets learned an invaluable lesson of the sea…respect for the mighty realm of Poseidon.

Retlif’s sponsorship of the U.S. Naval Sea Cadets and the Voyage Of Discovery program has helped to ensure the future with hands on education and instruction. As Retlif President Walter A. Poggi said, “the program’s unique blend of technology, practical experience, and leadership-building direction says a great deal about the kind of individuals who compose the Sea Cadets. I think their dedication bodes certainly quite well for the future of this country, and we at Retlif are proud to stand behind them and to do our part to ensure their future success.” 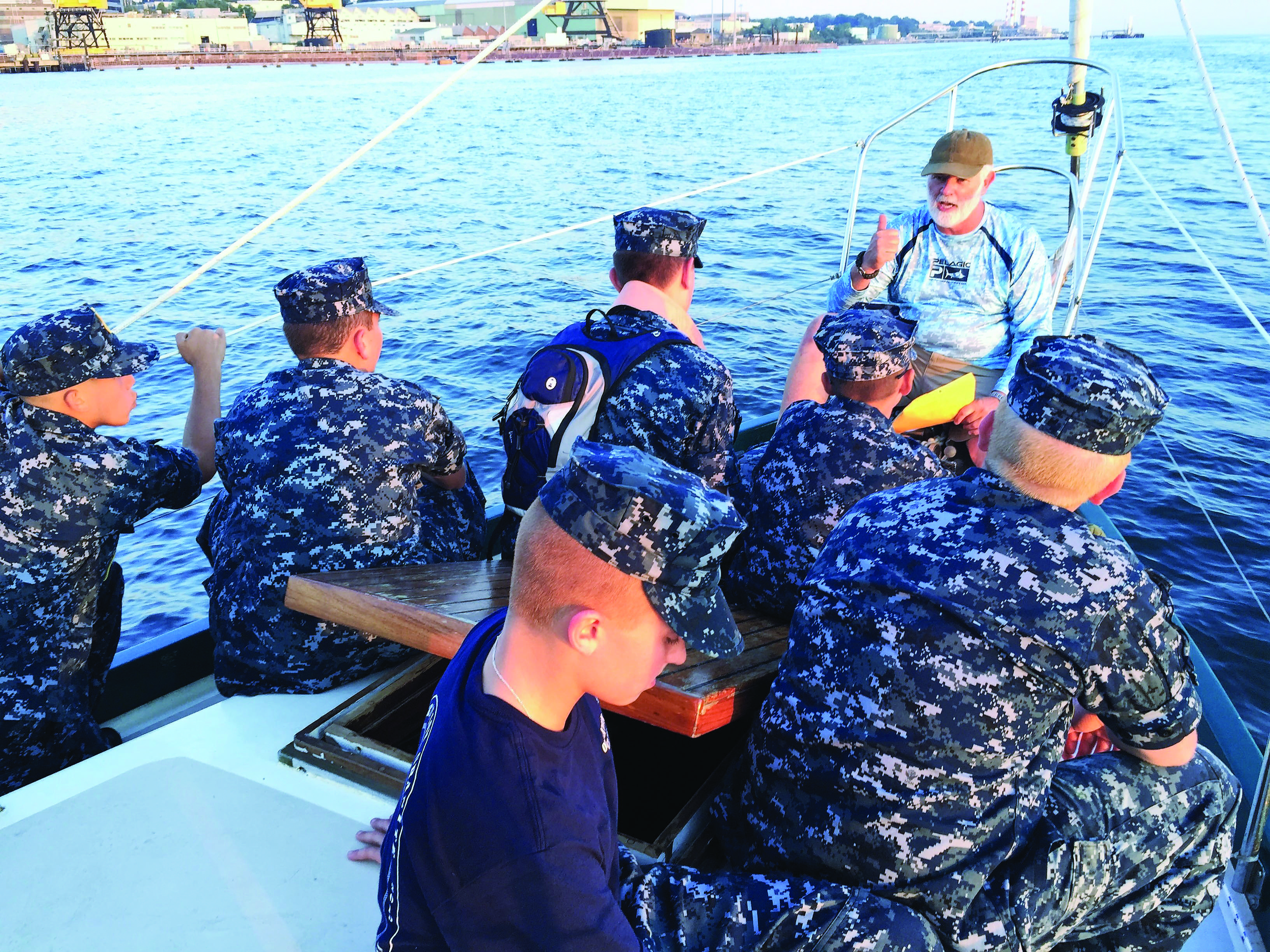 Take Me Out To The Ball Game

Retlif’s 2017 commitment to the U.S. Naval Sea Cadets also extended to a fun-filled evening at a Long Island Ducks (Liberty Division of the Atlantic League) baseball game a month later. The cadets, were warmly recognized on the field on Military Appreciation Night by cheering baseball fans, and watched the game from the Retlif box at the Bethpage (NY) Ballpark. 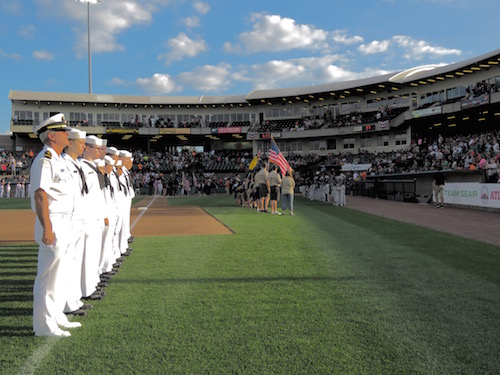 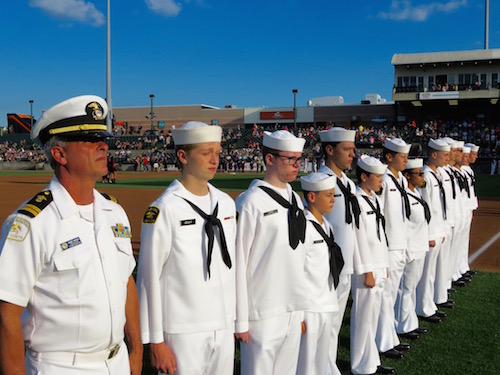 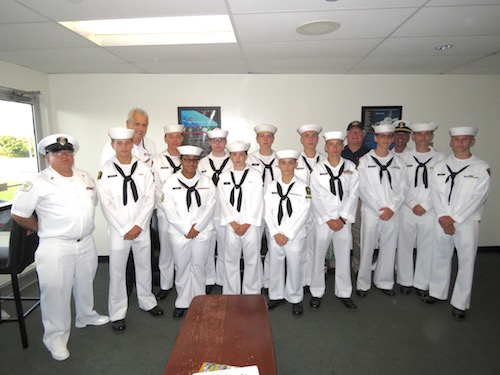