The Captain finally had to acquiesce to the reality of his physical limitations. His body, which had so skillfully allowed him to accrue the greatest quantity of hits (1,771), runs (949), doubles (390), sacrifice flies (65), RBIs (970), extra-base hits (658), multi-hit games (495), and total bases (2,945) in Mets franchise history, as well as patiently wait out the most walks (761) and available for the most at-bats (5,996) just wouldn’t allow the dedicated ballplayer to continue an All-Star career at a level that made enduring the tortures of multiple surgery recoveries and strenuous prep work to get ready for a ballgame any longer. 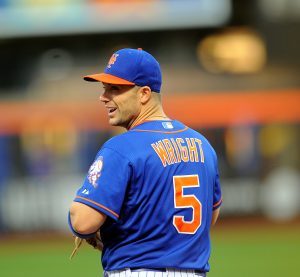 08/28/15 Boston Red Sox Vs N.Y. Mets at Citifield Queens N.Y.New York Mets third baseman David Wright #5 comes on the field in the top of the 1st innning photos by sportsdaywire

David Wright made an emotional appearance at Citi Field on Thursday, accompanied by team COO Jeff Wilpon, and head of the GM triumvirate John Ricco, to properly announce the team captain would be activated for the last homestand of the season, commencing on Sept. 25, and is already penciled in to start at third base on Saturday, Sept. 29, to give him at least one last day to keep the sun shining bright at the sunset of his career.

With a towel handy to wipe the tears of his pronouncement, Wright’s minor league rehab time and simulated games with the big club had reluctantly told him what had already been a painful recognition.

“Throughout this process,” Wright admitted, “a lot of times my mind and my heart were telling me one thing. My body was telling me something different. I was always – I can do this, I can do this. The goal was to come back as the player I expected myself to be. I needed the games for my body to finally tell me – it’s not working.”

The Wilpons are actually extending a classy gesture, throwing Wright a suitable bouquet to help him conclude his career in uniform, to thank him for his years of service. The avoidance of the “r” word is to protect the contract, protect the insurance policy, which still has two years and $27 million to go from the eight-year $138 million contract extension Wright signed prior to the 2013 season.

“The decision (to allow Wright to play once more) has nothing to do with insurance and finances,” Wilpon tossed out at the start of the presser. “It’s about David’s long-term health, his quality of life and desire to get back on the field. Giving him a chance to return to the field is the right thing to do for David, our organization and the fans.”

Quickly after it was announced Wright would take the field on the 29th, tickets for that game, already a Fireworks Night promotion, sold out. What once was a schedule remainder, an unimportant affair between two teams at the bottom of their division, Mets and Marlins, suddenly has the feel of a postseason extravaganza.

Expect a showering of love by the fans to their beloved Captain, a fitting sendoff, but ironically, it might not be the next time Wright’s name appears in a boxscore this season. By being activated on the 25th, manager Mickey Callaway will have the option of using Wright as a pinch-hitter or perhaps even in the field in a runaway or extra-inning game.

If it does happen, however, it will not be a spur of the moment call.

“It’s going to be something that I need to give (Wright) at least a few innings heads-up,” said Callaway on Friday. “We’ll know how the game is going and he’s definitely going to need time to prepare.”

Wright joked that if he spots a soft-throwing lefty on the mound he “might move out to the plate for whoever’s supposed to hit.”

He’s also jokingly apologized in advance to whoever’s pitching on the day he’s taking the field. +

You knew the pronouncement of Wright’s closure to playing was a very big deal when virtually the entire team and coaching staff – when literally a game was about to be played at Citi Field less than an hour later – stood quietly along the walls of the press conference room to observe the proceedings.

Todd Frazier, whose place Wright will literally be temporarily occupying in two weeks, stood in admiration of Wright after that day’s games.

“He’s one of the greatest Mets to play here,” Frazier reported. “I looked up to him as a young kid coming up. I remember when I played against with the Reds, just watching his prowess, the way he got ready for ground balls. When it comes to third basemen, especially him, he deserves all the credit in the world.”

So David Wright now gets a chance to add to his many team-leading totals, or maybe even to his home run total of 242, which is currently just ten behind franchise leader Darryl Strawberry. He won’t likely get enough at-bats to increase his career batting average of .296 to the .300 level, but he sits third all-time with the club already, behind John Olerud (.315) and Keith Hernandez (.297).

But he will get a chance to play at least one more game with his long-time buddy and infield partner Jose Reyes. While Callaway couldn’t officially make that announcement some two weeks prior, he fully understood the significance of seeing those two together again in front of a packed house at Citi Field.

“I think they probably both deserve that. So we’ll see what happens when we get there.”

The decision to retire Wright’s number 5 is a given, but that official announcement is a ways away. For one, as noted, Wright’s not “retired” yet. And two, Wilpon passed the buck to his newly minted executive in charge of alumni matters, Jay Horwitz.

This gives the end of this season a whole new perspective, the end of an era. The time to decide where Wright’s place sits amongst the pantheon of Mets players can come later, and we can debate that soon, but for now, there’s at least one more important game to play in the career of David Wright.

It was important to him to have his young daughters, Madison, and Olivia, see their dad in a major league game.

“I love the game” Wright emphasized. “But I really, really going to love that game.”