Since Christmas Eve Mets fans have been excited at the notion they’ll now be able to root for a dominating relief pitcher who is arguably one the best of his field, perhaps all-time, with one of the highest strikeout-per-inning ratios (14.6, third highest in modern era), 621 Ks and allowing just 228 hits in 381.2 innings in an eight-year career – all with the crosstown rivals – and impressive numbers throughout his baseball card – .170 BAA, 2.36 ERA, 1.043 WHIP.

And Betances was the first reliever in baseball history to record 100 or more strikeouts in five consecutive seasons (2014-18), leading all major league relievers in strikeouts from 2014-16.

“Dellin is one of the elite relievers in the game with an incredible track record of pitching on the biggest stage and in playoff games,” Van Wagenen proclaimed in the press release.

“I think guys who strike people out have a chance to make a huge impact on the game,” he added. “We look to (Betances) to getting outs in key situations from the other team’s best hitters.”

Betances, who turns 32 toward the end of spring training, is just as happy to remain in his native New York City.

“I love New York,” said Betances. “It’s in my blood. I grew up in Manhattan. Went to High School in Brooklyn. Played minor league ball on Staten Island. Made it to the big leagues in the Bronx. And now I’m excited to go win a World Series with the Mets in Queens.”

Talk about a well-rounded New Yorker. Or, at least, well-traveled.

Ahh, but as is sometimes the case in Mets Land, there is a catch.

Betances had a “perfect” 2019, faced two batters, struck both out. But that extremely limited appearance was due to an injury-marred season, first from a shoulder surgery, which evolved into a lat issue, and then when he was so excited to be back on the mound in that game against the Blue Jays in September, he celebrated those two Ks with a tiny “dance” from the mound in which he partially tore his left Achilles. Ouch!

However, Betances claims to be back at full strength, has been long-tossing already, and is expected to throw off a mound in the next week or two.

The Mets did their due diligence in assessing the injury and rehab schedule.

“Our expectations are that he’ll be ready to go (by spring training),” said Wagenen.

Betances passed his requisite physical, and has been working with Mets Medical Director Dr. Davis Altchek for his rehab.

The four-time All-Star added that he now has “to work a lot harder because I’ve got to gain back some of that strength you lose when you have to wear a boot for six weeks. Throwing-wise, I’m doing everything I have to do. Last year was hard for me. I can’t wait to get back (on the mound).”

It was those injuries, however, that allowed Betances to become a Met. There’s no doubt that had he been at full strength, and enjoyed a typical season where he was mowing down hitters at a record pace up in the Bronx, that Yankees GM Brian Cashman would not have allowed him to escape their roster to become a free agent.

The Yankees, though, were busy signing Gerrit Cole to a record eight-year contract, and that was arguably a factor in allowing Betances to slip away.

In the ‘90s, then-Yankees owner George Steinbrenner had a predisposition of collecting former Mets like a big game hunter – Darryl Strawberry, Doc Gooden, David Cone, Jose Vizcaino among them. Lately, that borough-to-borough transit system has been working in the reverse, with Robinson Cano, Justin Wilson, now Betances, the now former-Met Todd Frazier, and new Mets manager Carlos Beltran now almost more former-Yankee than he was former-Met. Even the current Mets coaching staff has a decidedly former Bronx pinstripes history, with Chili Davis, Tom Slater, and Hensley “Bam Bam” Meulens all having served as Yankees employees at various times. Recent coaches Glenn Sherlock and Dave Eiland also coached for the Yanks.

It was Beltran who was a major influence in having Betances join the Mets, who did have offers from several other teams, including Joe Girardi’s Philadelphia Phillies.

Beltran rang Betances’ phone numerous times as soon as he got the Mets gig, and the mutual admiration between the two was apparent.

“Beltran is one of those players who is just hungry for baseball,” said Betances, “hungry for any way he can help his team win. I think the Mets were always engaged, but since he came in, Carlos was steering me to come to this team. His being the manager is going to help, being a future Hall of Famer.”

Cano also gets an assist. “Cano spoke very highly of the (team’s) second half, as well as the team performed.”

The 6’8”, 260-pound righthander admits being a real New York sports fan, and can quickly offer proper analysis for many of its teams, including the Knicks and Nets. He also had an affinity for many Mets players growing up, and when asked, mentioned Pedro Martinez, Jose Reyes, Edgardo Alfonzo, Rey Ordonez, and Al Leiter.

Betances now gives Beltran and new pitching coach Jeremy Hefner interesting options out of the pen. Of course, questions are plentiful, as in, will the real Edwin Davis please stand up. Was giving Jeurys Familia a three-year deal a waste of money, or can he come back to his previous closer form? Of these three former closers, who gets the ninth? Can Seth Lugo and Justin Wilson maintain their consistent performances? And can Brad Brach still be a factor?

But if all or most of these questions result in the positive, the Mets bullpen has a chance to be one of the best. They hope.

“We have a chance to have a dominant bullpen,” proclaimed Van Wagenen. He wasn’t in all “come-get-us” mode, but he remains ever-confident.

“In the past, our goal was to increase the floor of our projected window,” BVW explained. “This signing (was) different. This signing was intended to blow the cover off of our ceiling.”

While that metaphor doesn’t quite make total sense, the intentions were clear.

Betances is signed for one year. Or is he? Media reports on his deal were slightly different, almost slightly confusing in the layout of his payout. Of course, the Mets don’t officially announce those figures, but some outlets report he signed a deal for just $2.2 million, with a $5.3 million signing bonus. Some just add it up and say he’s getting $7.5 million. One NY daily has him at $10.5 mil.

It was actually a lengthy series of back-and-forth that closed the deal, not a simple here’s-our-price kind of transaction. It came down to a 7:00 AM call just before Christmas, where Betances’ agent, Jim Murray, relayed that “you have a small window of opportunity if you make an aggressive play, you have a chance of signing him.”

The interesting arrangement of years and options and buyouts likely stems from those questions regarding rehab.

“When you have a player coming off a year where he faced only two batters,” noted the GM, “there’s an element where we have to try to find a way to give him the financial security he’s looking for while also protecting his downside, but also giving him upside. The same goes for us. We wanted to make sure we had some downside protection while also giving everybody the opportunity to be successful.”

In other words, stay healthy, Dellin.

Betances will wear No. 68, the same number he wore with the Yankees, except for a brief time in 2016 when he tried 61. 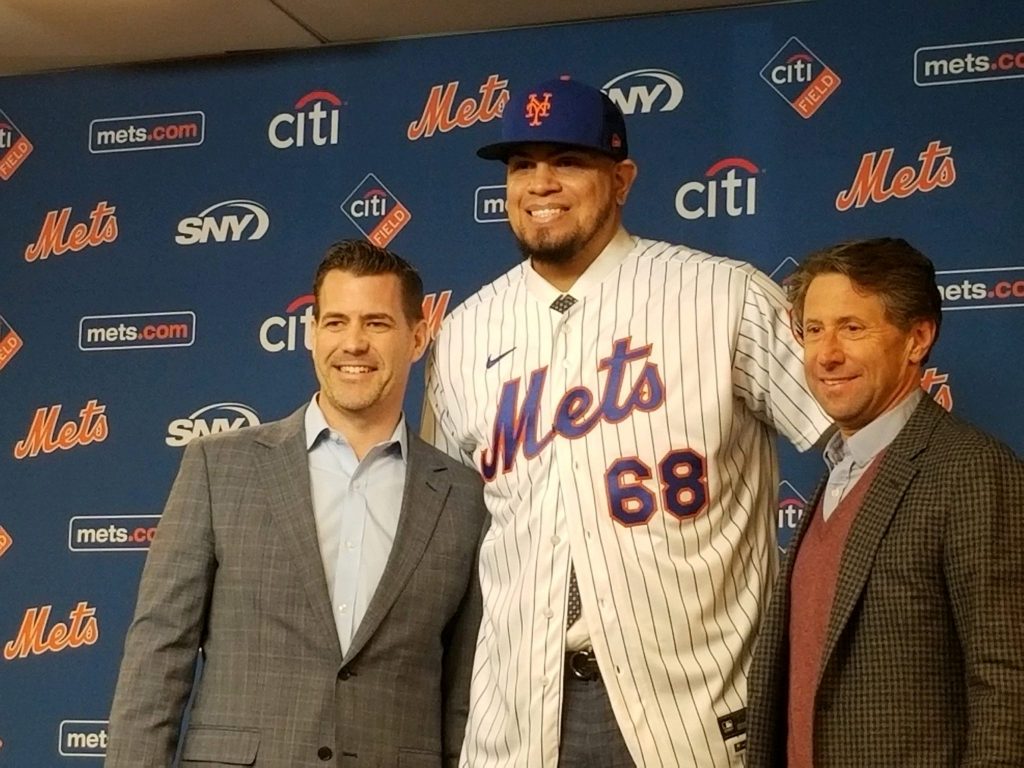